There is nothing worse than writing pain away with pain.

I kept looking at the constant blood dripping and I didn’t even faint. My index, ring and little finger started going numb. And it’s somewhere here that I felt this sharp pain which jolted me out of the trance. I realized what I had done. And yet after all this it didn’t feel anything. My heart still bled.

A year ago I slit my wrist. It has 7 deep scars left from that day. The first time I did it, it pained a lot. It was scary and it hurt real bad. And yet after that, I went on to have 12 more. You wonder why? At times even I do.

It is not that I’m some psychotic sadist who loves to see herself drenched in blood, it is just that doing such an act calms me and I forget how painful it was at that very moment. ‘That moment‘ which almost choked me to death (because I couldn’t breathe and I wanted to).

It takes a lot of guts to cut yourself open. Don’t demean those who did it. You only add to the hidden pain.

Some say that I’m crazy and I love to hurt myself. I’m not. Even I feel pain and you think people like me love to see these scars (for a lifetime) every time? At every hour of the day? NO, I don’t like to see them. And somewhere I really wish they disappear with time so I forget I did something so dreadful.

I understand that these scars will stay with me forever and won’t leave me whenever I want them to. And that I give it so much power to affect me. And when those prying eyes come for some juicy gossips these scars just won’t change their position. But at that very moment, nothing seems like a better absolute solution than hurting myself. 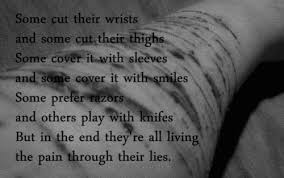 I read an article which said “harming self-releases endorphins aka natural opiates. These chemicals are your natural painkillers and give you a sort of rush- just like the drug opium; that’s why it feels so good” I could just immediately connect with what it said.

It is right, that exactly at that moment nothing feels better than feeling your own physical pain, but it doesn’t mean we don’t understand other emotions. Others still might think that I need psychiatric help because I have mental issues and I know it would make sense to many but to me, all I need is- to be heard. At that very moment when I withdraw myself from the world, somewhere that hope faintly flickers that someone would want to talk to me NOW and STOP ME from doing this. No one does. NEVER.

What’s worse after being hurt and carrying these scars is when other scratch them with their sharp tongues and bloated minds which lack any sort of empathy. And when these scars are only a matter of gossip and curiosity for others, it hurts more. For people who have seen my scars, everyone, EVERYONE only wanted to know “oohhh… how did it happen?” in an utter unempathetic tone.

The last thing I would like to hear is “people who hurt themselves and who commit suicide are losers. It’s a cowardly act. A shame on their existence“. Sir/Mam, if you even bothered to understand the pain of that person who is still standing in front of you after all s/he had to endure. Then, no one is stronger than her/him. S/he came back to live life. To get back that urge. You understand how much it takes? No, you don’t. Because you don’t have guts to endure that much pain and still have the urge to live a life worth that smile they own.

But still for them, talking about these scars is just another thing from their boring day. For them understanding me is ‘understanding what motivates me to do this’. For them, these scars only mean “a suicide attempt”. My friend, it was and yet it wasn’t.

I remember how once a friend, who saw my scars for the first time, reacted. A smirk, with some level of excitement and curiosity, “Woah…bro what is this?”.

The problem here is not that I have scars. Problem is that they are on my wrist and easily visible. If they were a bit somewhere else, where those prying eyes couldn’t fall, I bet you would never in your life assume that I can be upset too.

Don’t ask me “how it happened?” I don’t want to tell you. I’m just another girl you might see on streets and yet I have a story I have always wanted to share. I want you to treat me normal and not as some psychotic sadist just because I have scars.

I have scars and they are deeper than you can think because, after every day, there is one more in my heart.

The loquacious Indian girl. View all posts by tikki1

Hi this is Tikki_ta. I’m 21 years old and write from India. These blogs are my story. You can follow me on facebook @TikkiWrites. Apart from FB I’m no where on social media. If you like these blogs do tell me. If you don’t, then share it with people to know how stupid you are :P .